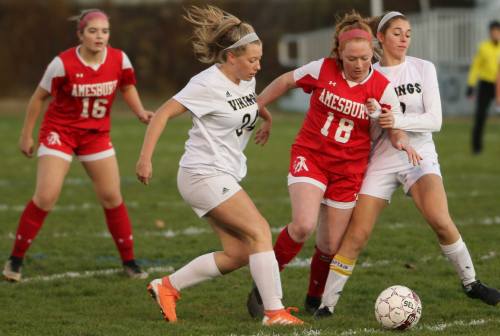 The Indians will play Essex Tech in the semi-finals next Monday (2PM) on Whittier’s new turf field.

Junior Maura Dorr (with over fifty career goals) added two more to her total for Winthrop.

Alyssa Pettet breaks past Julia Marcoccio (16) for a shot

Amesbury applied most of the pressure during the game, but Coach Adam Thibodeau wasn’t pleased with his team’s style of play in the early going.

“We hadn’t played for a while (eight days) and it showed in the first 10-15 minutes,” he recalled.  “We didn’t have the energy, so we relied on long balls.  We should have been passing to feet and sending players into space.”

“Passing to feet,” and “sending a player into space” kicked in for the Indians at 25:14 as Lilly O’Neill and Alyssa Pettet worked together on a nifty give-and-go.

“Lilly sent a pass between the sweeper and stopper,” recalled Alyssa, “and I just needed a step to be in on goal.”

“MK and I have done a good job of connecting on CK’s,” said Alyssa.  “She places them perfectly.”

“It was a great kick by MK,” added Coach Thibodeau.  “She’s been working on it all year.”