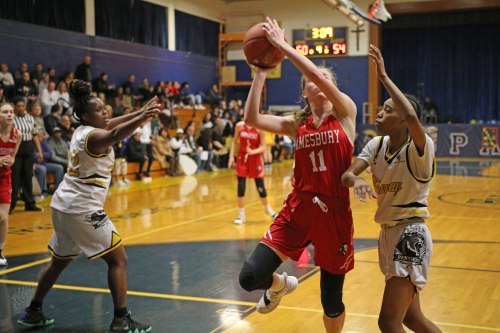 Amesbury rode their accurate free throw shooting (29-for-35) to a 68-63 win over Fenway in the First Round of the Division 3 Spartan Classic.

Amesbury will face St. Mary’s in the title game Monday night. It is not a reach to think that one of these two teams will be playing at the TD Garden on March 9th or 10th in the D3 state semi-final game.

Fenway has two six-footers (Janyah Gulley & Kayana Armbrister) but Janyah fouled out in the third quarter and Kayana in the fourth quarter with five minutes left.

“Their big girls getting into foul trouble certainly helped, “said Amebury coach Gregg Dollas afterwards. “His subs, however, did a good job of keeping them in the game.”

This was a one-possession game (62-59) going into the last minute. Then an Alli Napoli (21 points) layup, assisted by Sadie Kermelewicz, raised the lead and Avery Hallinan (27 points) sealed the deal with four straight free throws.

Avery struggled from the floor tonight, but at the line? Wow! The sophomore made 17-of-19.

“We focused on taking charges and making our free throws,” added McKenna Hallinan.

“We scored sixty-eight and we didn’t shoot well,” said Amesbury coach Gregg Dollas. “Avery on the line was huge. Our free throw shooting saved us because our outside shots weren’t falling at all early on.”

In the first twenty seconds, senior Imani Terry (16 points) hit a three, stole the ensuing inbounds pass and made a layup.

The next points after that were on a rebound basket by sophomore Wynter Neal (14 points).

Coach Dollas immediately went for a timeout after the 7-0 beginning. “I’ve never seen a start like that,” he said.

“That timeout settled us down,” recalled McKenna.