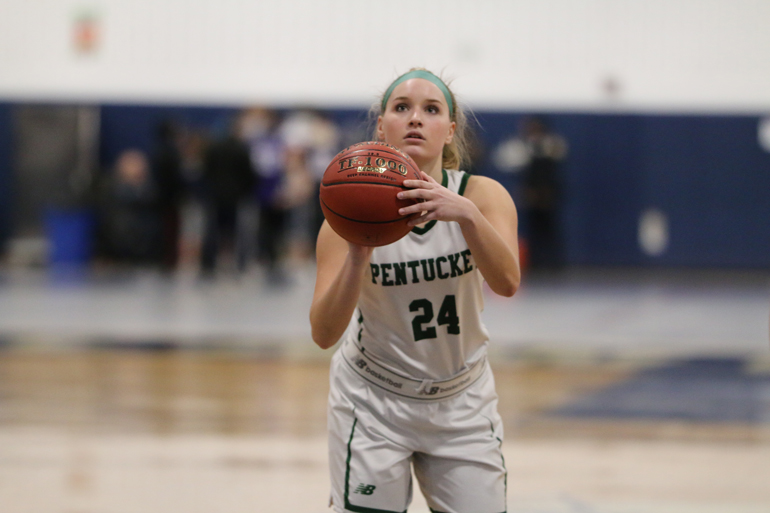 Pentucket (22-2) made enough of them (13) in the second half to survive, 45-37, on Wednesday night against comebacking Wilmington.

The D2 North semi-finals win puts the Sachems into the finals on Saturday (2PM) against North Reading at the Tsongas Arena.

The Wildcats could well have been considered overmatched after falling behind by nineteen (28-9) in the first half.

You score one point (!) in a period and you can leave that sort of impression.

Pentucket coach John McNamara wasn’t fooled: “Even when we were up at halftime, we knew they’d come back. They have scoring power and can knock down shots.”

As good as the Sachems were in the first half, the Wildcats nearly matched them in the second half.

“We weren’t playing in synch in the first half,” explained Wilmington coach Jessica Robinson afterwards. “We needed to play like a team.”

Getting Kylie DuCharme (13 points) back on the court after foul trouble in the first half really helped Wilmington. Kylie required special defensive attention and prevented Pentucket from trapping other Wildcats very often. The junior could also get to the basket and make shots.

The Sachems 21-1 segment in the first half was answered by the Wildcats with a 15-1 segment of their own in the third period.

Liv Almeida had a pair of three’s and teammate Kylie added a triple to two layins in Wilmington’s run of great offense.

Before you knew it, Wilmington was within five (31-26) with plenty of game left.

The defending D2 champs have been in close games before and were able to respond enough to get the W.

“We lost our composure,” recalled Angelina Yacubacci (10 points), “but we got it back at the end.”